These are not new, but I often forget them, so I wanted to post them somewhere so I can find them when I need them.

The belief that a cosmic Jewish Zombie who was his own father can make you live forever if you symbolically eat his flesh and telepathically tell him you accept him as your master, so he can remove an evil force from your soul that is present in humanity because a rib-woman was convinced by a talking snake to eat from a magical tree.
Yeah, christianity makes sense.

and then there is the following, which is a greatly summarised version of the version below: 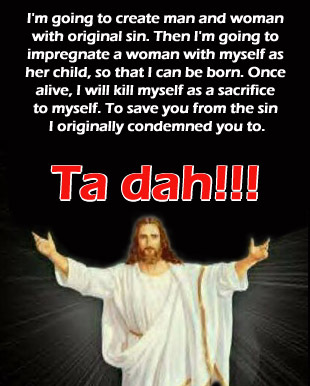 The Plan of Salvation

(as written by Mageth on Infidels)

God himself created man and woman and placed them in a garden, in “his own image”, but got righteously angry at them when they ate, against his wish, and after being tempted by a talking serpent that god himself had somehow allowed to slither about in the garden, a tasty, beautiful fruit, though he himself had placed it there but neglected to instill in his creations the knowledge of good and evil so that they would know it was wrong to eat it. Being omniscient, of course, he knew all this before he started, but was apparently unable to do anything about it because he had planned it this way from the beginning, and apparently god cannot change anything he already knows, in spite of the fact that he’s omnipotent, omniscient and omnibenevolent.

Later, God himself impregnated a virgin so that he himself could be born a human, a ManGod. This was necessary, apparently, because only his own ManGod blood could appease himself and deliver humans, who he created, and who he knew would muck things up by eating the fruit, from his own righteous anger.

Of course, he waited several thousand years to implement this divine plan, in the meantime taking the righteous action of drowning every creature on the planet except a few he could stuff on a boat. Not to mention handing down a Law that served to further condemn every one of us, and in which Law he himself had them frequently sacrifice animals to appease himself, though he knew the blood of animals didn’t really appease himself.

Much later, god, in a garden, prayed to himself to “take this cup” away from himself, though he himself knew that he himself had planned the coming events from the beginning and knew that not even he himself could save himself, even though he was god and omnipotent, omniscient, etc. Accepting this, he said, in effect, “Not my will, but my will.”

God then sacrificed himself to himself to save us from himself. (or had himself sacrificed; not much of a distinction between the two, really) Before dying, he himself asked he himself why he had forsaken himself.

He himself, being dead, then raised himself from the dead less than 40 hours later, though he himself had said he’d be dead for three days and three nights, which he could do because he was still alive, and later he himself pulled himself up into heaven where he himself apparently already was, and where he himself is described as now sitting at the right hand of himself.

He himself then sent himself (or a ghost of himself, if you please) back to earth to be a comfort to us, though he himself is still sitting at the right hand of himself.

And, glory hallelujah, he himself promised that he himself will return someday, though he himself is already here, and will still be there, to snatch up those who believe the god blood sacrifice story he himself told us, and kill the rest of us who don’t believe the god blood sacrifice story, no matter how nice we were otherwise. But, since killing us isn’t enough to appease his righteousness, he himself will then judge us, though according to ManGod he himself will also not judge us, and being a god of love will cast most of us into hell for an eternity of suffering. He has to, of course, because he is a righteous, just god, and can’t figure out a way to save anyone who hasn’t been redeemed by god-blood, even though he is omniscient, omnipotent, and omnibenevolent, and loves us all.

So yeah. Christianity seems pretty silly to me.